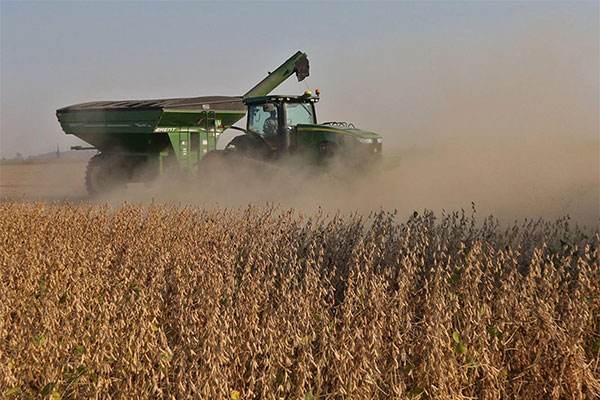 Less than three weeks after the Environmental Protection Agency extended approval through 2020 for top varieties of the controversial weedkiller, dicamba, agricultural officials in Missouri said that the state would not adopt any stricter regulations of its own.

Some in Missouri’s agriculture industry would’ve welcomed such limitations, as in recent years, the state has been among those hit hardest by reported damage from the chemical notorious for vaporizing and drifting onto other plants. Protection in Missouri now rests solely on EPA guidelines announced Oct. 31 that will add certain restrictions about when and how farmers can spray dicamba — policies that some independent experts are skeptical will significantly reduce dicamba-related complaints.

As weeds develop resistance to long-dominant herbicides like Roundup, dicamba is a decades-old alternative newly being groomed as a large-scale successor for industrial-scale weed control. But as sales of dicamba-resistant seed varieties and accompanying herbicide have surged in recent years — enabling bountiful harvests for some — so too have complaints of it moving off-target, fueling some concerns about the product’s ability to coexist with plants that aren’t specially engineered to withstand it.

Given dicamba’s divisiveness, some are criticizing the Missouri Department of Agriculture’s decision on Nov. 20 to forgo closer oversight of the chemical. But while the decision itself upset some, so did a deliberation process that left some farmers little time during harvest to make informed decisions or comments about the federal guidelines adopted just weeks earlier.

The department touted the additional safeguards EPA adopted, such as the condition that only certified applicators may spray the chemical over the top of crops, and limits about when and how often it can be used, including a cutoff rule that forbids spraying more than 45 days after dicamba-tolerant soybeans are planted.

But dicamba becomes more prone to evaporating and moving in hotter temperatures, leading some outside experts to believe that problems will remain, with the EPA’s cutoff rule potentially allowing spraying to occur well into the summer heat.

Bob Hartzler, a weed scientist at Iowa State University, is just one leading expert on dicamba to cite that concern, explaining in a written reaction that, “unfortunately, I don’t think these new restrictions will have a significant impact on the problems we’ve seen the past two years.”

“I was hoping for something similar to what Minnesota did in 2018, a date and temperature cutoff for dicamba applications,” he added.

Hard cutoff dates for dicamba use, varying by region, had been in effect in Missouri for the 2018 growing season — prompting some to say that the new guidelines could make matters worse.

“They actually made their regulations less effective,” said Tyler Mudd, a farmer and seed dealer from Monroe City, Mo. He said that he and other farmers in his area have experienced some dicamba damage, and wrote an open letter to Director Chris Chinn, following the Department of Agriculture’s decision.

Beyond the substance of the department’s decision, Mudd also criticizes the process through which it was made — one that he says was “hasty” and discouraged farmer participation.

He wasn’t aware of a formal public comment period or clear opportunities for farmers to provide feedback to the department regarding dicamba. Plus, with some growers still busy harvesting and performing on-farm duties, Mudd argues that the early part of November is a bad time for an inclusive conversation.

“When it’s in the middle of fall … it’s not very effective or conducive to comments,” he said.

Even the timing of the department’s announcement raised eyebrows — heralded by a news release sent out at 5:20 p.m. on the Tuesday before Thanksgiving.

“It was convenient timing of them, wasn’t it?” said Mudd. “It kind of reeked of the fact that they didn’t want comments on it because they weren’t going to be in the office the next few days.”

It’s more than simply row crop farmers who are invested in the department’s decision. Specialized operations like orchards and beekeeping businesses in Missouri have said that suspected dicamba damage threatens to put them under.

“We’ve got so many dicamba complaints,” said Ray Nabors, a southeast Missouri beekeeper and the state’s former apiculture, or beekeeping, specialist through the University of Missouri’s extension system, in a recent interview with the Post-Dispatch. “As far as I’m concerned, the stuff needs to be banned.”

But many other farmers swear by dicamba technology and insist it’s an essential tool for weed control.

That stance is echoed by industrial players that sell dicamba products, including Bayer. Company representatives cheered the Department of Agriculture’s choice not to pursue further restrictions.

Witten said that dicamba chemistry “has been around for 50 years” and that newer varieties, like those from Bayer, have “dramatically reduced” volatility. He said continued education for applicators is “paramount” but that the product can safely coexist with other plants and land uses.

“The whole thing’s a mess,” he said, describing frustration with a system that he says is riddled with ethical problems and loopholes that fail to hold applicators or chemical companies accountable.

He hopes the department will “rethink” its decision, especially given the volume of dicamba complaints and criticism from university scientists in recent growing seasons.

“Surely they can’t just ignore all this data that’s out there, but apparently that’s what they did,” he said. “Many of us were hopeful that the Department of Ag would do the right thing and either ban the faulty chemical, or keep a cutoff date for application. Sadly, neither occurred.”