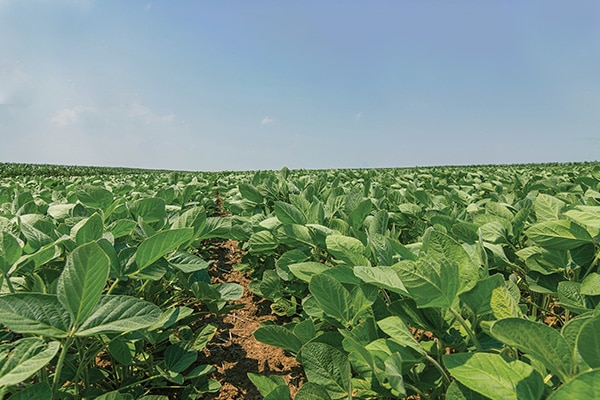 15 Aug Dicamba is proving a headache for some Illinois farmers

Complaints about a herbicide used by soybean farmers have soared in Illinois.

Dicamba isn’t considered harmful to humans, but it has wrought havoc in fields since 2016, when the herbicide, invented in 1967, came into use along with dicamba-resistant soybeans from genetically modified seeds marketed by Monsanto. Concerns have been serious enough that Arkansas and Missouri have enacted temporary bans on dicamba use, which can evoke strong feelings in farm country. In 2017, an Arkansas farmer was convicted of murder after shooting a neighbor whom he suspected had used dicamba, which is a legal but controversial product. In 2018, federal prosecutors charged a Missouri man with obstruction of justice and improperly applying dicamba to cotton and soybeans.

On the plus side, dicamba rids fields of weeds that have become resistant to other herbicides. On the down side, the chemical can damage nearby crops, including pumpkins, watermelons, fruit trees, tomatoes and various other vegetables in addition to soybeans not genetically modified to withstand applications of dicamba. Experts say that careful application is critical, and dicamba can vaporize under the right conditions and drift from where it is supposed to be.

In 2017, the Illinois Department of Agriculture fielded 246 complaints related to dicamba; in 2018, the number rose to 330. Through Aug. 9, the department has received 368 complaints. “In 2017, we didn’t know what to expect,” said Douglas Owens, chief of the department’s bureau of environmental programs. “In 2018, we really didn’t know what to expect, either. You would kind of hope that numbers would be down. We’re in a response mode, basically.”

Trends, Owens said, are tough to pinpoint this year due to heavy spring rains that delayed planting, when dicamba is typically applied. “Farmers couldn’t get into the fields until very, very late,” Owens said. “That’s made this year different than the other two. … I hate to make policy decisions right now. We don’t have all the data in, but we certainly have a lot of complaints.”

In an effort to protect crops, particularly orchard trees, the state this year established a June 30 deadline for dicamba use that was extended to July 15 due to late planting. Dicamba damage takes as long as three weeks to develop after application and farmers with damaged crops have 30 days to notify the state after damage shows up, and so complaints might continue coming in until late September, said Lauren Lurkins, director of environmental policy for the Illinois Farm Bureau. Farm country is divided over dicamba use, Lurkins said, and being careful and following directions doesn’t guarantee that there will be no problems. “I think that people were following the label in a lot of cases and it was still causing damage,” she said.

“It’s a difficult product to apply properly,” Owens said. “It’s a very complicated label that needs to be followed.”

Owens said the state hasn’t calculated the number of acres that have sustained damage. “From what we’re hearing, it appears to be fairly widespread as far as the amount of acreage per complaint,” Owens said. “It appears to be entire fields. … There appears to be some anger out there. I’ll leave it at that.”

Instead of fines, the department mostly has issued warning letters, Owens said. “I don’t believe there’s anything intentional at all,” he said. It is too soon to say what policies or regulations the state might adopt to restrict dicamba use, Owens said. Restrictions might include a ban.

“That’s always a possibility,” Owens said. “I’m not saying that’s going to happen. There’s a lot of things that would have to happen before we would do something like that.”